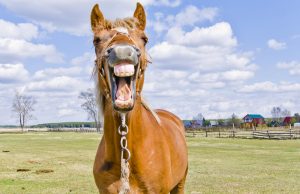 Long in the Tooth

Long in the tooth is something we say to describe someone who is getting older. It was originally used to describe horses with receding gums, which is a natural occurrence in horses because many do not get their teeth brushed regularly. Incidentally, gum recession is also possible in adult humans for the same reason, so don’t forget to brush and floss!

This one sounds kind of gross, but chewing the fat or chewing the rag is another way to say someone is having a long conversation or gossiping. The origins of this one are unknown, though theories include chewing on fried fat as long as possible, chewing fat to make you look like you’re talking, and even sailors chewing on salt-dried fat. According to Wikipedia, the oldest reference to chewing the fat is in the 1885 J. Brunlees Patterson book “Life in the Ranks of the British Army in India.”

We’ve probably all literally bitten our tongue at one point or another, so this unpleasant imagery is definitely not something we say to be nice. But bite your tongue actually means to stop talking or saying something that might be regrettable. The phrase is first attributed to William Shakespeare’s 1593 play “Henry VI,” but the phrase was around before then as “bide your tongue.”

Lying Through Your Teeth

The phrase lying through your teeth can be traced all the way back to the 1300s, but its exact origins are unknown. When someone is “lying through their teeth,” it means they are telling an outlandish or brazen lie.

Though modern dentistry has made pulling teeth a lot easier (and a lot less painful!), the phrase “like pulling teeth” means having a very difficult time getting someone to do something. The phrase has been around since the 1830s, or possibly longer, though its exact origins are unknown.