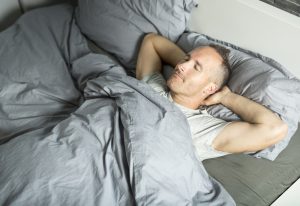 A serious sleep disorder, sleep apnea affects an estimated 22 million Americans, many of whom don’t even realize they have it. What’s more, of those with sleep apnea, nearly 80 percent have what is considered moderate to severe sleep apnea, and most of those cases are considered obstructive sleep apnea.

That’s because researchers theorize that low blood oxygen levels caused by the obstructive breathing may encourage the growth of certain types of cancers.
But don’t panic just yet, says Lesko. There is help.

Lesko says treatment is easier than many people realize.

“There are many different types of sleep apnea therapy,” she says. “You may have already heard of continuous positive airway pressure, or CPAP, therapy, which constantly ventilates air into your airways as you sleep. But there are also other options such as sleep orthotics your dentist can customize for you that reposition the jaw and essentially prop the airway open.”

According to Lesko, these treatments can help keep your oxygen levels high and hopefully reduce your risk of developing those cancers identified in the study.

“The researchers were not able to definitively say whether or not sleep apnea was responsible for the cancer, but just knowing the risk could be there will hopefully be motivation enough to seek treatment,” she says.

Desperate times call for desperate measures – at least, that seems to be the case with these old wives’ tales about snoring. It’s hard to believe that throughout history, people have resorted to such unusual lengths just to help a spouse or partner stop snoring and get a restful night’s sleep! Read on to learn more about these extreme measures and why they may or may not be worth trying.