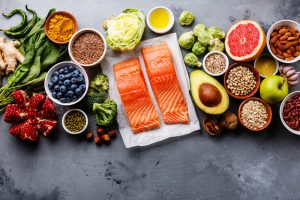 You’ve probably heard it before: Diet and exercise can make a dramatic improvement in nearly any condition that ails you. But a new study from the German Research Foundation published in the Journal of Clinical Periodontology has found that a diet that is said to reduce inflammation can also improve the symptoms of periodontal disease.

Periodontal, or gum, disease is caused by inflammation of the gums. It happens when plaque and bacteria enter the gums and bloodstream, causing red, tender gums that bleed during brushing or flossing. Early-stage gum disease is called gingivitis – and it’s completely reversible with diligent oral health care. But often times it is not treated and can turn into full-blown periodontal disease.

Periodontal disease doesn’t just affect the gums – it can cause everything from gum tissue and tooth loss to bone loss. Recent studies have also linked it to cancer, heart disease, stroke, diabetes and even Alzheimer’s disease.

That’s because many people simply don’t realize how serious it is – or how deeply it affects the rest of the body.

But now, there may be a helpful solution on the way in the form of a diet.

“Researchers found that when they prescribed nothing more than a diet change to a group of 15 participants, there was a significant reduction in the severity of periodontitis symptoms,” says Lesko. “That same change was not present at all among the control group.”

So, what was the big change that caused such dramatic results?

“The diet was anti-inflammatory,” says Lesko.

That means it was specifically designed to include foods that reduce inflammation in the body. It was rich in foods like legumes, fruits, nuts and fish, and low in foods containing sugar, dairy and trans fats.

Upon consuming the special diet for eight weeks, researchers noticed a marked reduction in inflammation and bleeding in the study participants, who did nothing else to change their lifestyle during the study.

“They didn’t brush more or floss their teeth – they literally made no changes other than to adapt this anti-inflammatory diet, and that alone improved their periodontal disease symptoms across the board,” Lesko says.

So, should you use an anti-inflammatory diet to treat your own periodontal disease?

“Making positive changes to your diet can’t hurt,” says Lesko. “But we still want to see patients take better care of their teeth, and that means both brushing twice a day and flossing.”