Since the early 1900s, many American children have participated in a fun tradition that combines a childhood rite of passage with a bit of fun and mystery. That tradition is the tooth fairy, and chances are, whether you’re a parent or a child, you’ve at least heard of her.

The earliest known mention of the tooth fairy tradition dates back to the 1920s in a play called “The Tooth Fairy,” though other countries and cultures have their own versions of tooth fairies that date further back. For example, children in France leave their teeth for a mouse they call La Petite Souris. In Spain, children leave their teeth for Ratoncito Perez, a rat or mouse, depending on who you ask.

What all these traditions have in common – besides the taking away of baby teeth in the night – is that each figure leaves behind a prize in the form of a trinket or money. Getting paid for body parts you don’t need anymore? Not a bad deal if you think about it! But recently, the tooth fairy has been making headlines about just what she’s leaving behind when she takes those precious baby teeth away.

She’s not wrong. According to a recent Delta Dental survey, the average payout for a baby tooth dropped 43 cents here in the United States in 2018. Using an admittedly adorable chart called the “Tooth Fairy Index,” Delta Dental provides average rates for tooth payouts around the globe.

For instance, children receive an average of 3.26 euros per tooth in Ireland, and $4.88 CAD in Canada. Here in the United States, the annual average is now just $3.70. So why the drop?

“I’d say budgets are tight, but I think part of it is parents rewarding kids with different types of prizes than monetary,” says Lesko. “I’ve heard some parents offer extended screen time or later bedtimes, which don’t cost anything but are a big deal to kids.”

The survey also found that children’s first teeth netted a higher payout than subsequent lost teeth, at an average of $4.96, and the rates per tooth vary depending on where in the United States the child resides.

“Here in the western part of the country, we average a little bit higher per tooth at $4.91,” Lesko says. “But in the Southern United States the average is only $3.91, and the Northeast is around $3.75 per tooth.” Have you ever tried to remember what it was like when you lost your first tooth? Unless you have an incredible memory, most of us can’t recall how we felt when a tooth first got wiggly and then fell out. Our parents might remember, but most likely they only recall the milestone if we had a particularly good – or particularly bad – reaction to it. This thought led us to the question: Does losing a tooth for the first time scare most kids?

END_OF_DOCUMENT_TOKEN_TO_BE_REPLACED 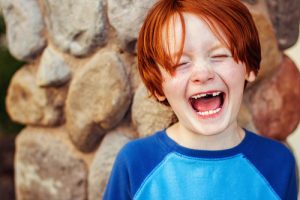 Have you ever wondered where the tooth fairy comes from? Have you always had more questions than answers when it comes to this mystical tooth collector? Here are a few trivia questions to see just how much you know about the tooth fairy. Even if you get them all wrong, at least you’ll learn some cool new things along the way!